I excitedly met up with Steve Peters to start the day at the 2014 Locust Moon Comics festival not knowing what I would find. To my delight, the room we were placed in was bright, interesting and unique, with an old curly iron chandelier, now housed on the floor almost as if it was an art installation. All around the top of this vast room were shelves decorated with unique objects like cardboard bricks or round found objects artfully grouped together. The silver ribbon braided through my hair twinkled with impending magic. 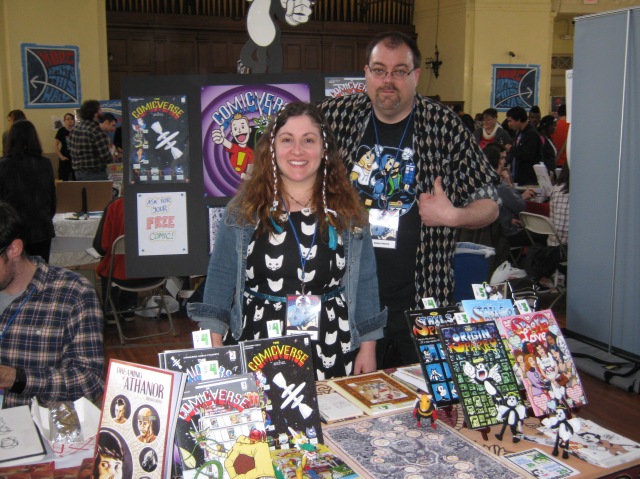 The day ebbed and flowed with artists, writers and fest go-ers stopping by and taking time to see our comic. Many passers-by carried the massive LITTLE NEMO: DREAM ANOTHER DREAM anthology, proudly showing their purchase and having fun getting all the artists to sign it. I took a break from our table to see the fest myself, and was delighted to chat with Adam McGovern, creator of Nightworld, an intelligent comic filled with witty wordplay and set in a dark universe. I also stopped by to talk comics with Jamar Nicholas, and bought Fist, Stick, Knife, Gun which I’m currently devouring. I also had the privilege of buying The Sirs of Time and a dragon knight print from the uber-talented J.M. Dragunas who was so nice to boot!

Later on I had an amazing Vietnamese vegetarian meatball hoagie from Kung Fu Hoagie. I didn’t expect it to be as good as it was, but once I bit into it, I was delighted. I guess I should have figured a food cart with a beautiful dragon painted on it would be da bomb! I also was stoked to be introduced to Eric Battle and Raphael Tiberino, two stand-up talented guys I had heard so much about from Steve. Dean Haspiel also stopped by and had a chat! From the wonderful weather, to the great food and talented vendors, this fest was filled with fun!

Steve Peters received a Xeric Grant in 1996, which he used to self-publish Awakening Comics. In 2006, he won the Gene Day Memorial Prize for a magical realist comic called Chemistry. He met Bianca Alu-Marr at an open mic in 2003 (Steve was playing music and doing the sound, Bianca was reading her poetry). The Comicverse is one of many projects they have collaborated on, and their most popular. Bianca is the writer and and Steve is the artist. Sometimes Bianca writes and plots the stories; many stories are co-plotted by Bianca and Steve.
View all posts by thecomicverse →
This entry was posted in Blog Posts and tagged Adam McGovern, Alternative, Awakening Comics, Bianca Alu-Marr, Chinese Dragon, comic book, comic book shop, comic shop in space, Comicverse, Dean Haspiel, Dragon, Eric Battle, Evette Makes Things, Independent, J.M. Dragunas, Jamar Nicholas, Locust Moon, Locust Moon Comics Fest, Raphael Tiberino, sci-fi, Science Fiction, Self-published, Small Press, Steve Peters, The Comicverse, The Rotunda, Ying. Bookmark the permalink.